I started getting serious about gardening about 10 years ago. Every year there’s another corner of the yard that seems to beg for a makeover, and we spend waaay too much on plants. I enjoy before-and-after comparisons, so I looked for “before” photos that showed the worst of our backyard. They weren’t hard to find!

Like this one. Northwest winters are famously wet, and if we don’t hit that last window of mowing opportunity in the fall, lawns get really long and shaggy by spring. I don’t know how our dog puts up with this. 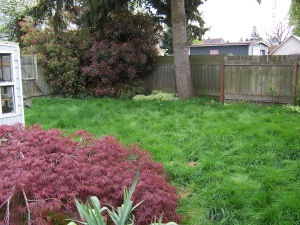 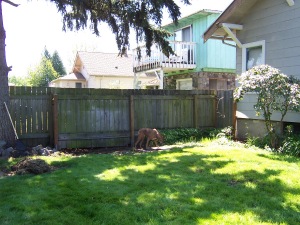 Between the deck and the garage was a lean-to that once housed a golf cart. Then it became a catch-all tool shed.

The shed came down and Eric rebuilt the deck with Trex.

The yuccas, which bloomed beautifully in June but had far outgrown their space, came out. We still pull out sprigs of yucca—you can’t kill ’em! Where the shed once stood, we planted a small Japanese-style garden with a rocky island surrounded by river rock “water.” When I look at this baby picture I realize how much it’s grown in just three years.

Here’s the rest of the yard, trimmed up. Hostas line the fence, and bishop’s weed fills out under the fir tree. (Never, ever plant bishop’s weed! You’ll never get rid of it!) 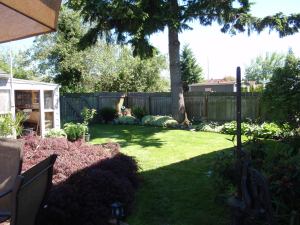 A Nishiki willow glows in the southwest corner.

Looking back toward the deck from under the fir tree.

In January of 2012 we had an ice storm that ruined trees throughout the region. Eric had just taken photos of the ice encasing the Bene Kawa coral bark Japanese maple on the island. Seconds later I looked out the kitchen window and saw this.

We replaced the tree, but we couldn’t find another Bene Kawa. But that wasn’t the worst part. The wind and the weight of the ice broke most of the limbs off the north side of our 80-ft fir tree. It became dangerously unstable and we had to have it taken down. This tall tree was the defining element of our backyard, and without its height, the view looked as flat as Kansas. Nothing stopped our eyes from gazing straight down the alley.

Inspired by the coenosium garden at the South Seattle Community College arboretum, we replaced the fir with a selection of conifers and made a little woodland against the fence. Starting with the little tree on the left, they are: dwarf golden Eastern white pine, alpine fir, Himalayan birch, dwarf Japanese black pine ‘Thunderhead,’ dwarf limber pine, golden Hinoki cypress, and Japanese umbrella pine. We’re enjoying our own coenosium garden (although I still miss that old fir …)

Don't be shy! Leave a comment--I'd love to hear from you! Cancel reply