With the speed of a Pacific banana slug riding a glacier, new white joint compound is creeping across the face of the west wall. The glacial pace is due, I admit, to the fact that I am not having the time of my life doing this task. That’s a lame excuse, but it’s all I’ve got. Sometimes I just sit in my living room chair and look at the wall and wish it were done. So far, wishin’ ain’t workin’. 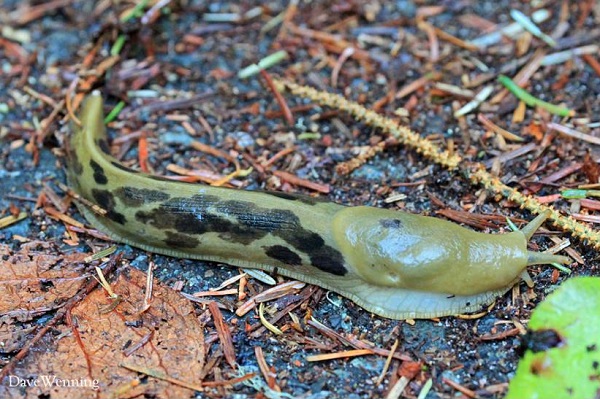 Work gets in the way. By the time I get home, I have other things to attend to and little energy for projects. Golf started this week. Facebook is a total time-suck. Now that Daylight Saving Time is in effect—hallelujah!!—I might have a chance to get something done in the evenings while I have decent light pouring in. (That sounds promising, doesn’t it? However, I know it’s BS, so don’t expect anything). Oh, and my back hates being on a ladder. There … those are all the excuses I can think of. For now. 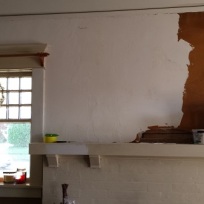 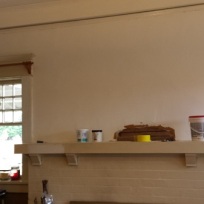 I took up the resurfacing again in the left corner of the fireplace wall, where I knew the narrow slice of wall between the window trim and the foyer opening would be difficult … and it was. I had a hard time maneuvering the putty knife to apply a smooth coat around the trim. Lots of sanding in my future. Can’t wait. 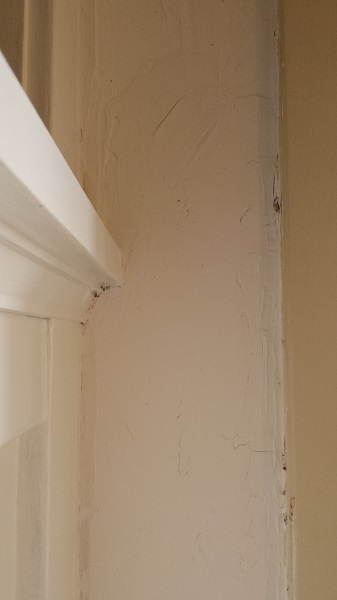 In a tight place

Then I plastered (or, joint-compounded?) across the top of the window. I found myself removing more and more of the old plaster finish coat, coaxing it gently off the wall. I grudgingly came to accept that nearly all of the top layer on this wall would have to go, so I helped it along. Only those places that were firmly stuck remained, and these islands of original finish plaster became tinier and tinier, as if the sea were rising. 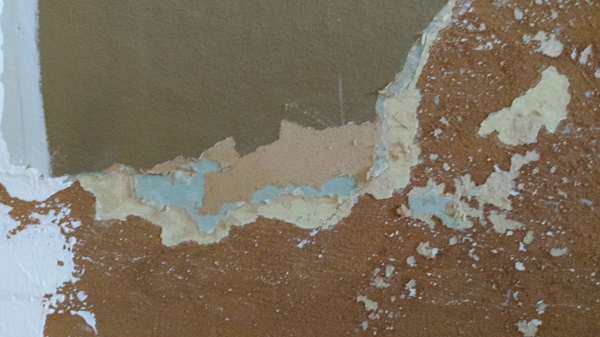 A topo map on our wall

I knew I’d have to apply a second coat because the first coat didn’t quite bring the surface out to the correct depth against the trim. And, one spot looked like this: 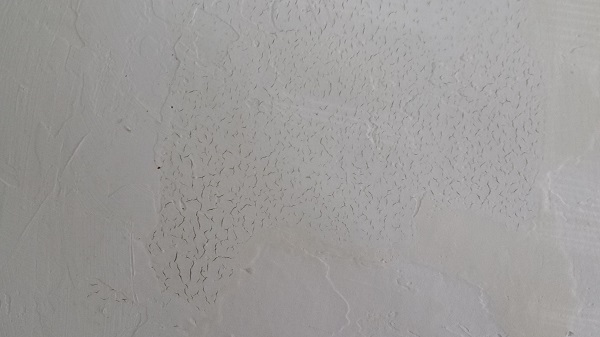 I took the easy way out: I applied a second coat and hoped for improvement. This time, no crackle finish. Hey, maybe wishin’ does work!

The second coat seemed to slide on easier. You’d think by now my technique would have improved, but I suppose you have to have a technique before you can improve it.

After a while, it occurred to me that I might look up plastering technique online. The You-Tube videos made it look easy—it’s all in the wrist! I did learn a couple of tricks. One: They all use bigger trowels than I have (I’m using the biggest putty knife I can fit into the tub of mud (not a trowel). And two: Smoothing over the top coat with a damp sponge will virtually eliminate the need to sand. Well, heck … wish I’d known that 50 lumpy square feet ago. 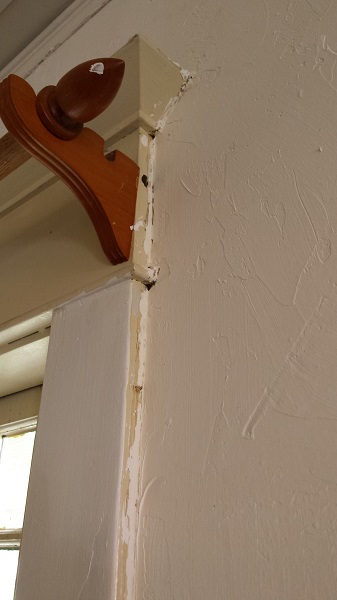 Coat one. Each coat is only about 1/8 inch thick.

Inevitably and with considerable trepidation, I had to remove the damaged plaster over the middle of the mantel. I whacked the length of it with the handle of a putty knife and it all came away with alarming ease. After vacuuming up the debris, I was left with a neat hole down to the lath, right in the middle of the mantel. Barely noticeable when I pushed the mantel clock back into position! Cold air poured in from the uninsulated wall cavity. Didn’t humans of a century ago think of insulating their walls? 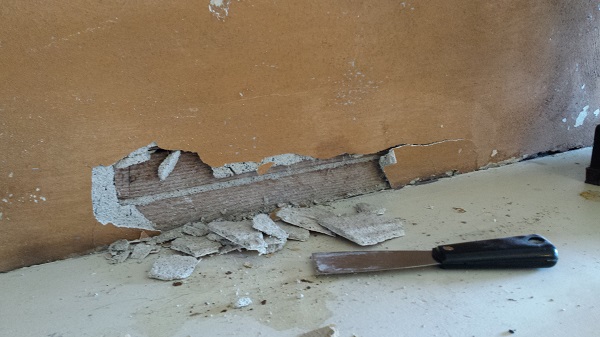 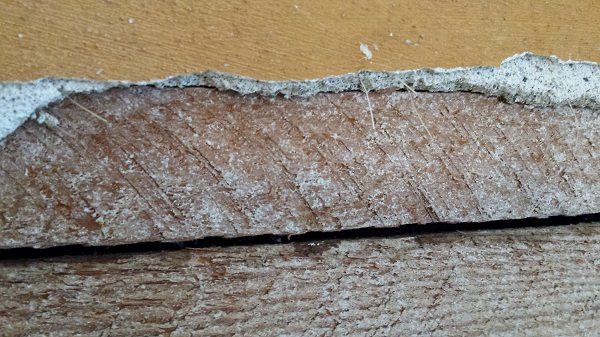 Look closely–you can see the horse hair sticking out of the plaster.

When I had finished coaxing most of the wrinkles out of the area above the fireplace I cast my gaze upon the space between the right side of the fireplace and the casement window, which I knew to be a problem area because of the suspicious way the finish coat paper has slumped. True confession: When I bought the house back in 1984, I noticed some dampness there. It’s hasn’t been damp for ages (I don’t think), but the damage has been done.

I stabbed the offending area repeatedly with my trusty frog-green utility knife … and this is what I found. 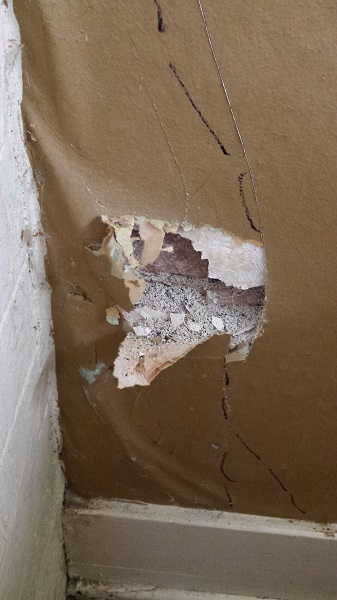 Not good. Not good at all. What makes plaster pulverize like that? Water. What lurks behind? I’ll leave that mystery for my next post. OK, the truth is … I was busy this past weekend, and I didn’t get around to digging out this hole. We had company over for Duke’s tenth birthday dinner, and I didn’t want to deal with the mess and pulling the TV cabinet into the middle of the room, where it would surely stay for weeks. That’s right, folks—I’m blaming it on the dog. 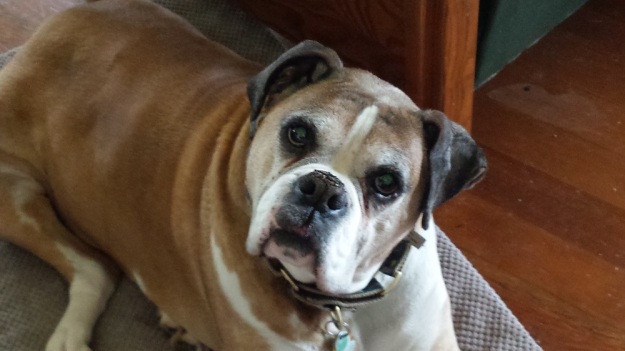 How can anyone resist this adorable face? Happy birthday, dear Duke!

Eric and I made a trip to the box store to get real plaster patch material—the kind you mix with water and then work like hell before it sets up. As soon as I get up my nerve to see just how badly that section of wall is damaged, I’ll try my hand at true, from-the-lath-up plaster repair. But first … maybe I’ll take a tropical vacation! 🙂

What will it take to patch these holes? I can’t let it go. I can’t! There must be some way to bring them back. Oh, I can’t think about this now! I’ll go crazy if I do! I’ll think about it tomorrow. After all, tomorrow is another day!*

*Extra credit if you can identify this.

Is it un-American to ignore the Super Bowl? To be sure, I was a mere 12 feet away from the TV. I could hear it, but I ignored it for the most part. I ate my requisite portion of buffalo wings, but—OMG—I forgot to make the guacamole. What excuse do I have for such atrocious behavior on our national holy-day? I was painting.

I have not seen the hearth in weeks

After a two-week gap in progress, I finally had a day to splash some gray on the first wall! Along with that, of course, came plenty of white trim.

But first, a little cleaning was necessary. We’ve all had the experience of moving a large piece of furniture and recoiling in disgust at the detritus that was living beneath. I won’t gross you out with what I found when we moved the kleiderschrank. (You’re welcome.) Except for this piece: 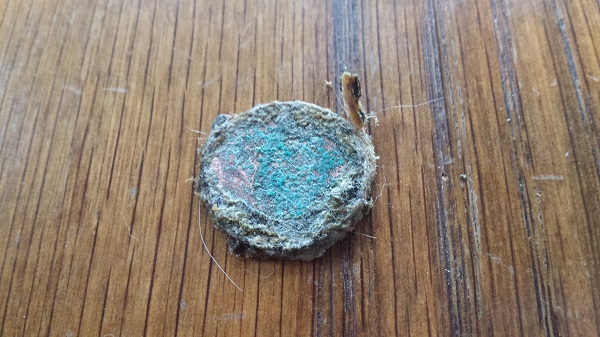 I cut in the wall edges on Super Bowl Eve, working without a net, as usual. (As I’ve mentioned, I don’t normally tape, and I’m too lazy to fuss with a drop cloth). I forgot to take pictures. Because I painted the crown molding trim before I began ripping away the loose finish plaster, the edge of the molding showed rough old paint in places, and the white paint didn’t quite reach the edge. Poor planning on my part, but fixable with a bit of extra work. I love extra work.

I schmeared joint compound into the resulting gap and touched up both white and gray paint after it dried. Much better! 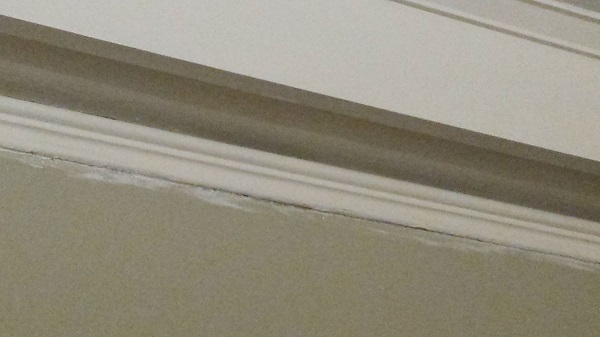 Joint compound to the rescue again

The wall color (Sherwin Williams Jogging Path, which I had color-matched in Valspar Signature formula) covered the former brown paint beautifully. A second coat was necessary only to fill the holidays. This is the first time I’ve used an eggshell finish, and I’m happy with the results. Previously, I’d always used flat to downplay the irregularities in the old plaster walls. I like the eggshell effect. During the day it gives off a subtle shimmer, but at night it’s soft and velvety. 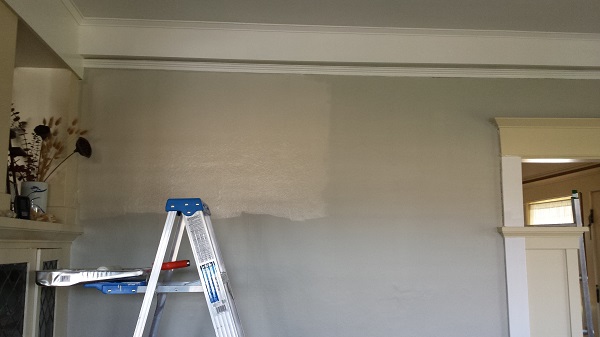 Beginning the second coat. It dried a lot darker.

I wasn’t so cavalier about painting the base molding, however, because I need to be able to slop on the paint when it’s at floor level. Applying tape is annoying, but I don’t have a steady hand when working down that low. When Lacy bumped my arm, I wish I’d taped the top of the baseboard, too. 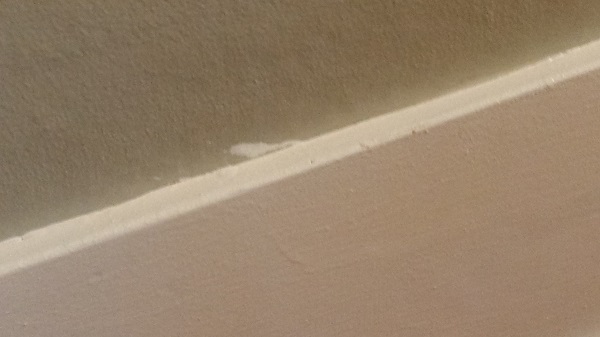 TA DA–I have ONE wall painted! How do I describe this color? It’s a warm gray, yet it has greenish undertones. It shade-shifts dramatically in the light, from top to bottom and from corner to corner, which I love. In the light of day it looks much cooler, but at night it’s very warm and soft. I don’t know how this looks on your monitor, but think of lichen. 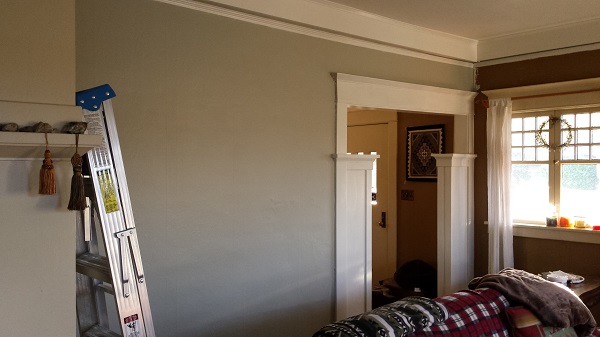 Now we can reassemble the kleiderschrank and reclaim some floor space in the library. Rose-kitty will be happy to have her private balcony back.

I have a ton of work to do to get the next wall ready for paint. I can’t wait until the entire living room/dining room/foyer are lit up with this new scheme. For now, I find myself wandering into the living room just to admire “the wall.” I’m lichen it. (Sorry, couldn’t stop myself.) 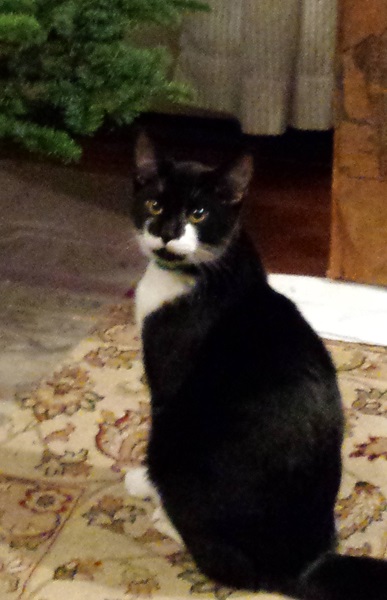 Yes, we’ve adopted another kid! One evening just before Christmas, we came home to find a 6-month-old tuxedo kitten running around near our back door. He was terrified and wailing piteously, looking for shelter from the driving rain and 34° weather. I called to him, and he came right over—obviously he had been someone’s pet. I picked him up and carried him inside. He was soaking wet and shivering. After being toweled off and sitting with Checkers for a few minutes, he began confidently exploring the house. 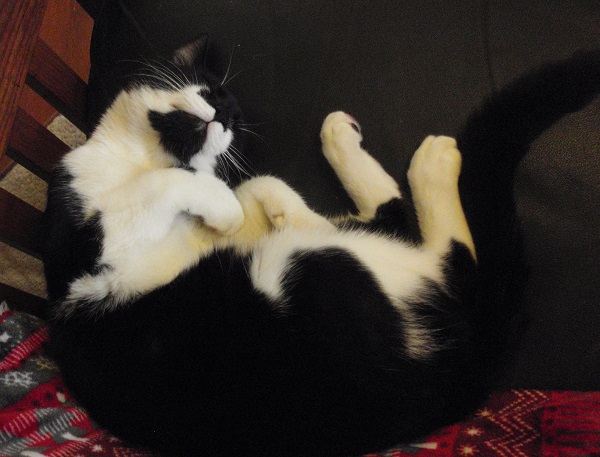 For about five seconds we thought about taking him to the Humane Society, because he’d be adopted in a heartbeat. Instead, we bought him a collar and ID tag and had him neutered. We had to name him after someone with a big moustache, so we picked David Crosby (even though David’s moustache droops down, and our Crosby uses moustache wax to turn his up.) 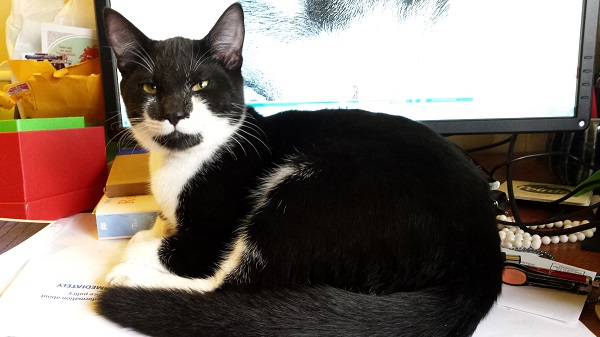 I don’t know whose cat Crosby started out to be, but he has in-and-out privileges now, and he has chosen us. He’s living the dream—he loves his new mom and dad and kitty friends, and he adores Duke. He definitely keeps us entertained with his zany kitten antics and his two speeds: trouble and cuddle.

How do they find us? They just keep coming! The answer to your question is  … eight. 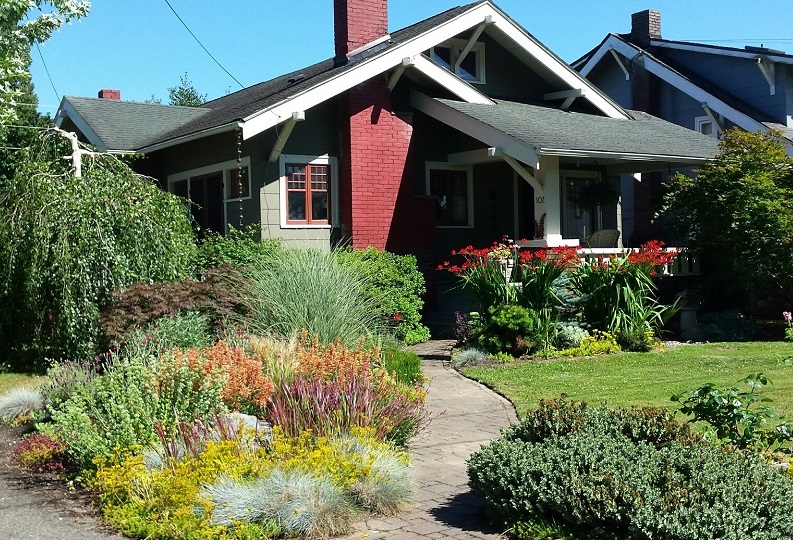