Eric and I are fortunate to work for a company that takes a holiday break at the end of the year. We’ll have a glorious 16 consecutive days off, beginning Dec. 19. What will we do with that precious time? We’ll spend it at home, DIYing, of course!

Lately I’ve been thinking about painting the living room, dining room, foyer, and interior hall. It was summer of 2004 when I last tackled that job, and if I remember correctly, it took me four months to finish it. There’s seemingly miles of trim (and 108 four-in. square panes of glass), so I can hardly expect to finish it in two weeks … but if I’m diligent, I can get a great start. Maybe good enough so that when I sit in the living room, I’ll see only newly painted surfaces and all the work still-to-be-done will be blissfully out of sight, behind me.

For the past 12 years, the living area has been Valspar Oak Grove (not a current color), a golden-brown, very Craftsman-y shade. The trim is a rich, creamy ivory. The colors look something like this … on my computer, anyway.

Oak Grove is a cozy wall color that goes well with the dark reds and greens of our furniture. But when I saw how Nicole Curtis of HGTV’s Rehab Addict painted the Minnehaha House in the first season of her show, I got it in my mind to go with something lighter the next time around, and I feel that time has come. I don’t usually fall for trends, but this room has had me admiring pale warm grays with white trim ever since. If I’m going to go there, I hope the gray trend sticks around for a while. 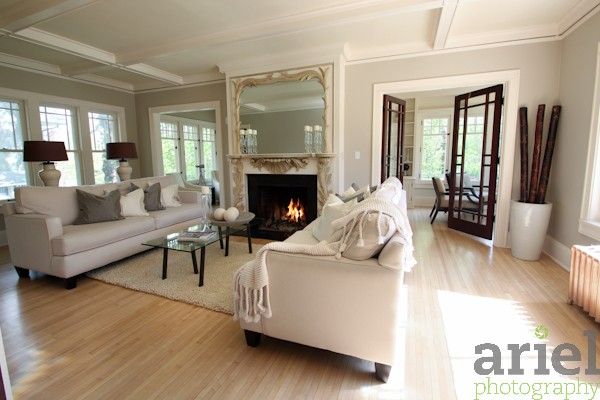 While others were trashing the malls on Black Friday, I was collecting paint samples for the audition process. By the time I pick one, I’ll be able to dump all the other samples in a can and get a free gallon of Mutt Greige. 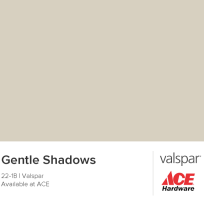 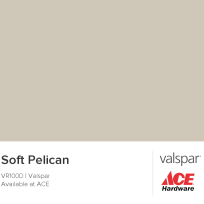 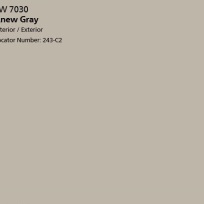 For the trim I want to use the same Chef White that I have in the kitchen and bathroom. (In person, it reads a lot whiter than this online paint chip.) Finally, all the painted woodwork in the house will be the same color. (Only the bedrooms still have natural wood trim.)

By Saturday of Thanksgiving weekend, I had paint swatches on three living room walls. Well, now I was committed. I had to paint. See how that works? (The colors don’t look true in the photo. ) 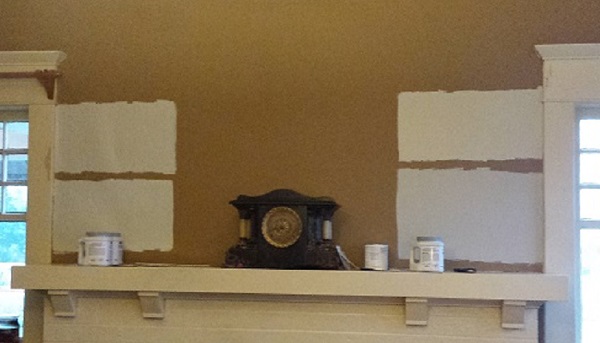 But here’s the rub: I don’t think any of these warm gray shades are going to go well with my dining room wallpaper. Shortly after I painted last time, I put up this William Morris-like wallpaper above the plate rail … not to everyone’s taste, but I’ve always loved its acanthus ebullience. The colors tie together all the colors in my house. Fitting the paper around the door and window trim was a tough job, and I don’t want to take it down. 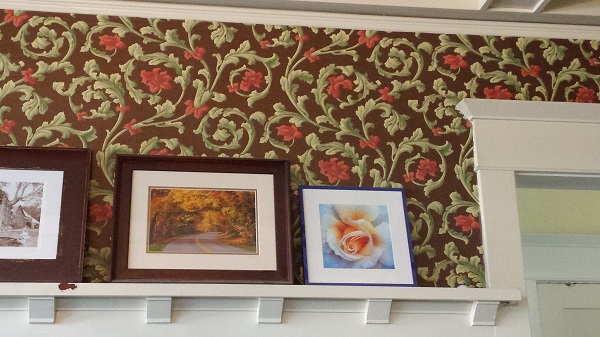 Too bad if you don’t love this wallpaper!

I’ll see how it looks, but I’m pretty sure any color I pick will be too light and too gray to complement the wallpaper’s bronze background. That will leave me with four choices:

I’ll figure it out later. In the meantime, I have a more pressing problem. Do you see it? Do you see that bulge in the wall’s surface, on the left? 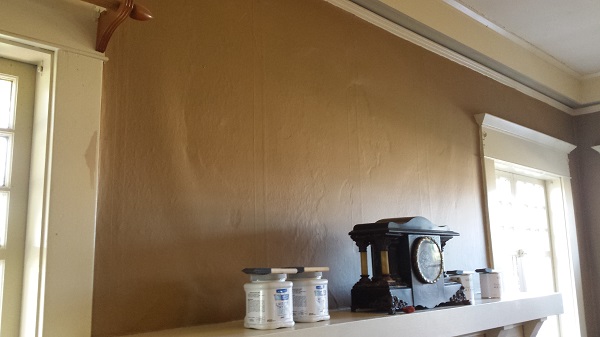 That bubble is not stuck to the wall … and there are spots like that all over the living room. I can account for three layers of paint, but it’s far thicker than that. I believe my plaster walls are covered with a finish paper that was pasted over the finish coat of plaster. Decorative wallpaper or paint was applied on top of the finish paper. There’s only one way to tell. Here’s another big crack and bulge. The thick paper/paint layer is peeling away from the wall at the wood trim. Look closely and you can see the crack extending up to the picture molding to the left and another crack above the door trim.

We gingerly pulled off a piece. The finish coat of plaster came away with the paper and paint! That’s why it looked so thick. And that’s what I was afraid would happen. Now we know why the surface was cracked.

Right down to the brown coat

What you see above is the rough undercoat of the plaster, called the brown coat. Because it’s … brown. Sometimes animal hair was added to this brown coat for strength, but ours does not have animal hair.

I dissected the brittle plaster chunks as best I could: finish plaster, finish paper, and several coats of paint. The earliest paint seems to be a sick shade of pale green. The same color I turned when I realized the extent of the problem. 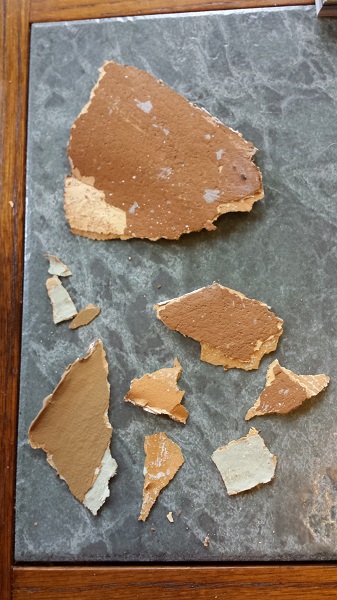 What’s in this stuff?

Whatever shall I do? More choices:

Of course, I know the answer. I have to keep my eyes on the prize. On a positive note, this condition exists only in the living room (I think), and the living room has only three walls, much of which are windows and fireplace. So I’m hoping the damage is fairly contained [weak laughter]. Stay tuned.

Here are the colors we’ve chosen—ceiling, walls, and trim. What do you think?

This looks too creamy here.

As you’ve seen at the bottom of my posts, we’ve adopted the ginkgo leaf as our house’s symbol. I think it began when we planted a baby ginkgo tree in our Japanese garden five years ago. The little bugger was a stick only three feet tall 2009. Now, it’s over 12 feet tall. 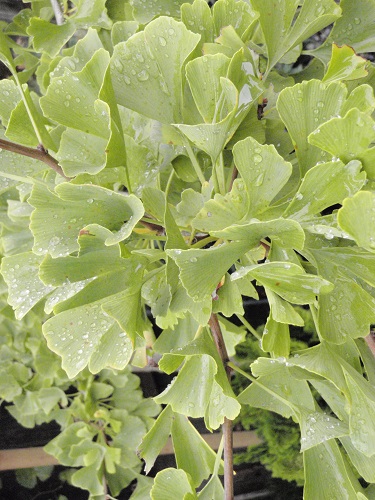 Since then, we’ve accumulated a number of ginkgo-themed items, like this vase from Frank Lloyd Wright’s Taliesin.

And these candy dishes, souvenirs from a visit to Bend, Oregon.

And our bathroom night light.

I even have a ginkgo print shirt and two pairs of ginkgo leaf earrings. So, we were excited to find an Arts and Crafts ginkgo stencil pattern in the gift shop when we visited Frank Lloyd Wright’s Oak Park home and studio in 2012.

Now that we were making over our spare room, I had the perfect place to use it. The honey-gold walls needed a little sumpin-sumpin. In my mind I saw a crown of bronze metallic ginkgo leaves circling the room. Sometimes it’s difficult to translate my visions into materials that are available in real life. But this time, Lowe’s had the perfect shade of metallic bronze in their paint samples.

The paint gal shuffled off to mix a quart. When we returned five minutes later, she informed us that they no longer carry that paint. “Then why do you have the samples in your display?” I asked. “The vendor hasn’t removed them,” she shrugged. ARGGHH!!!

With my vision in jeopardy, I turned to the internet. Who makes metallic paint? Sherwin Williams to the rescue! They have metallic paint in all colors of the rainbow. I selected a bronzy shade called “Coconut Husk,” a gold metallic base with a brownish tint.

I had never stenciled before, but it seemed like a pretty straightforward process. I was only using one color … what could go wrong? After our floor refinishing fiasco, I’m happy to report: Nothing!

Here’s what I used: the stencil, paint, a natural sponge, blue painter’s tape, and light duty spray adhesive. Plus, a pencil, a paint tray, and a step ladder.

First, I measured each section of wall, found the center point, and determined how many stencil repeats would fit. Then, working from the center point toward each end of the run, I held the stencil against the wall and made tiny pencil marks in its registration holes. Next, I took it outside and sprayed the back with a light coat of spray adhesive, and added a strip of blue tape to the bottom edge.

The stencil was easy to align vertically because I simply abutted its top edge to the picture rail, using the tape to hold it in place. I carefully pressed the entire stencil onto the wall, making sure all the delicate pointy ends were firmly adhered. Then I dipped a corner of the sponge in the paint—not too much—and daub, daub, daubed until the exposed wall was uniformly covered. 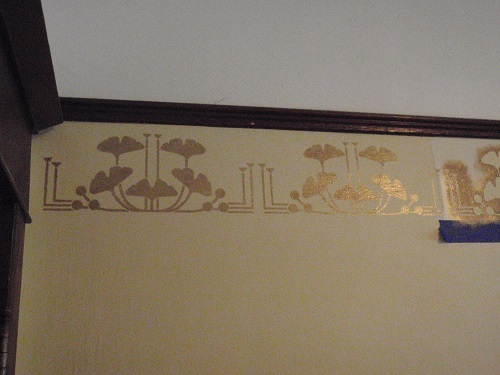 When I was stenciling near the windows, I saw our three feral kitten friends tiptoeing by under the hedge. I rushed to meet them on the front porch to take their pictures. Here are the Morse triplets: Dot, Dash, and Ditto, now nearly a year old.

They’re still basically wild, but they interact with us a lot, hanging out with us when we work in the gardens, and showing up every evening for happy hour treats on the back porch. Lately I have been able to pet Ditto while she eats Fancy Feast from my hand, and Dot and I play a game where I walk my fingers toward her and she gently bops my hand. What little sweethearts!

Removing the stencil was easy—I simply pulled gently from one corner. I painted three or four repeats, and then washed the stencil in the kitchen sink to remove built-up paint. 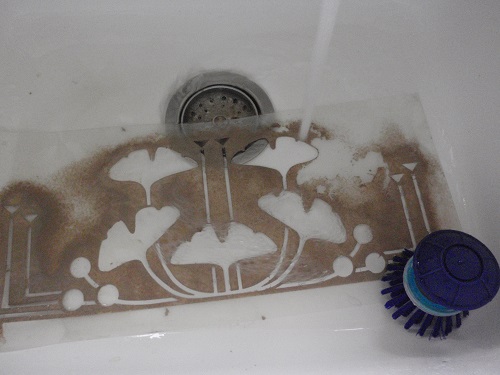 Respray, retape, move the ladder, repeat. It took a lot of daubing over a couple of days, but at last I was done and I could step back and survey my work. I couldn’t have been more pleased. The effect was exactly as I’d imagined: The ginkgo garland took the room right back to 1913!

We love how the light picks up the subtle sheen of the stenciling, and how the border softens the transition from the picture railing to the wall. Now, all we have left to do are install the new window coverings (on order), buy more bookcases and a new ceiling fixture, have the room rewired, and finish the closet. Hmm … we’re not as done as I thought we’d be! Will we ever finish anything??